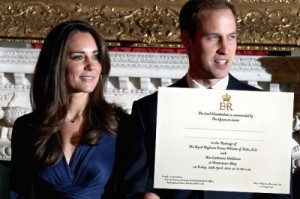 An article in Hollywood Reporter shows that the royal wedding is getting a royal share of social media.  In the past seven days, the event is getting one mention every 10 seconds and is exponentially growing.  Technology firm Greenlight measured an average of 9,000 posts a day on online media relating to the Royal Wedding, with wedding “haters” outweighed by positive comment by a ratio of 6:1.

Of course, we girls know exactly what people are talking about.  Posts about Middleton’s dress (23 per cent), the guest list (20 per cent) and gifts (18 per cent) were the most popular.

The royal wedding is expected to be one of the year’s most watched events globally, with some estimating viewership of up to two billion people.  Palace officials have said that as well as live streaming of the wedding, there would be a live blog and integrated Twitter feed, underlining how technology is changing the way the royal occasion is viewed around the world compared to past events.  How utterly modern of them!

Certainly, we colonists are more “gaga” than most British.  We are buying full size cut-outs of the happy couple, picking out fake rings, planning all sorts of parties and avidly following every crumb of wedding cake news.

It seems The Lipstick Economy is part of the 29% of blogs dishing on the Royals.  And, in true confession, we are having a little Anglophile wedding reception ourselves to celebrate the happy couple and Britain’s way of helping the U.S. economy.  Champers please.  A toast to William and Kate!

You are currently reading Marketing to Women: Royal Fever Hits Social Media at The Lipstick Economy.