When looking at travel, women are the primary decision makers – making 80% of all decisions.  And we women are going mobile.  TripAdviser says some 40% of us use a mobile device to plan a trip.

A recently post on instant.ly identified two groups who are shaping mobile usage for tourism – Generation X and Digital Natives.    Gen X are the  ‘digital travellers’ making use of all  technologies in all stages of the customer journey  (mobile devices, tablets, desktop PCs etc.).  The  ‘digital natives’ (20th century kids) have grown up with technology and have interacted with digital technology from early stages in all lifetime situations.

According to Intrepid Travel, who booked over 100,00 US passengers for 2012,  63% were female (this is on par with the global figure of 64%).  The majority of  travellers were aged between 25 – 39 (46%).  So female travelers between the ages of 25 and 39 are their biggest market. Some 24 percent of American women have taken a girlfriend getaway in the past three years, and 39 percent of American women plan on taking one in the next three years.

SoLoMo marketing is increasingly becoming a critical and pivotal tool for tourism marketing. It combines social media, location and context based marketing as well as mobile devices. Interactions are becoming digital real-time experiences at a physical location.

When looking at the top U.S. travel apps and sites, consumers seemingly prefer apps for guidance and the mobile Web for trip planning.  Seven out of the top 10 Travel apps during June 2012 featured a map/navigation function, while the top mobile websites mostly included airlines and travel aggregators, such as TripAdvisor and Priceline.com. 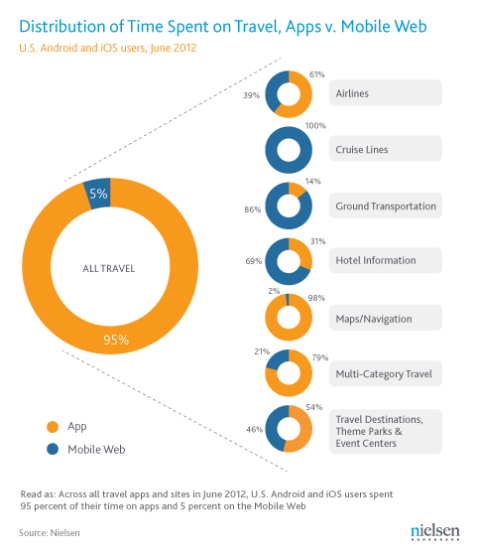 Interestingly, during a summer when gas prices were on the rise, GasBuddy, which lets users search for local gas prices, ranked as the number-two Travel app with nearly nine million users. Along with Google Maps, MapQuest and Southwest Airlines appeared on both lists but had more mobile Web users than app users.

You are currently reading Marketing Travel to Women: Going Mobile at The Lipstick Economy.